The Verdict - a thumbs up

I decided to jump in with both feet and bake a cake for my first use of the air fryer.....there was a method in my madness, I just did a very basic 2-egg sponge.  My thinking was that if it didn't turn out too good, well I'd only used few and relatively cheap ingredients....plus I was pretty sure husband would eat it anyway regardless of what it looked like, if I poured custard on it!

Well, the cake was absolutely fine, it came out really well, I cooked it for 20 mins at 160 deg, tested it and it wasn't quite done, so gave it another 5 mins, by which time it was perfect.  And a bonus was that the air fryer (AF for short) takes no time at all to heat up - just one minute in fact, rather than the 10 mins it takes my big oven to get up to temperature, and 5 mins for the caravan small oven, so there's an electricity saving straight away.  Here's the cake, cut in half and sandwiched together with jam:- 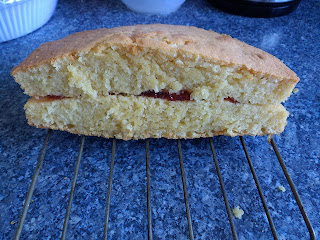 It's light and fluffy with a crisp crust.  I'll definitely be baking cakes in it again.

I also cooked dinner in the AF, chicken breasts wrapped in prosciutto, and sliced Jersey Royal potatoes which I brushed with a tsp of oil.  Cooked for 25 mins at 180 deg, turning them over halfway through.  Again, cooked to perfection.  We had leftover tenderstem broccoli and Savoy cabbage from yesterday, I just heated them through in the microwave.

So I'm really happy with the AF and can see me using it almost on a daily basis, it will certainly replace my big oven for just us two, although not for a crowd of guests.  Apparently you can even make toasted sandwiches in it, the kind where you butter the outside of the bread so it crisps up in an electric sandwich maker, I'll give that a go soon.  I have got a sandwich maker, but it lives in a cupboard so I have to drag it out to use it.  The AF will mainly live on the hob on top of my oven, except if I have to use the hob, obviously (the joys of having a small kitchen with not much work surface!).  So it'll be easier to use that than to keep getting the sandwich maker out.

Thank you to all my Canadian readers (never realised I had so many!) for your comments about the Coho salmon.  I'll probably open a tin for our lunchtime sandwiches today.  The shelf label in Morrisons said it was a discontinued line, but I can't say I've ever seen it on their shelves before.

Jayne thank you, I do know that butter freezes well, I've frozen it before.  I would have got more than 4 packs at that price, but they didn't have as many packs in the reduced chiller cabinet as they did the tins of salmon on the shelf, so I didn't think I ought to take any more.

We're off to the caravan tomorrow for a few days, so doing some prep for that today.  I'm expecting to see more of my plants in flower there, as well as radishes and salad leaves ready for picking.