Some lovely things to report (for a change lol)

This morning we went to our favourite place, Dunster beach....it'll be the last time we can go for 8 weeks, if not the rest of the year (depending on how the weather is from mid-December, and if I have my operation then).  It was beautiful as always, not many people there at all, despite the bright sunshine - although it was freezing cold with a strong icy wind coming off the sea.  Betty loved it, she really loves the beach and it makes me happy to see her enjoying herself so much.  She runs around like a mad thing, grabbing mouthfuls of seaweed and flinging it up in the air, and digs big holes in the sand....she's always covered in sand by the time we get back to the car, when she washes her mouth out with the water we take for her, the bowl is always full of sand!
You might remember I was asking about small food processors or grinders a couple of weeks ago, several of you came up with suggestions, thank you, I had a look at all of them.  Whilst looking on Amazon at the one Cherie suggested (the Ninja), I noticed on the same page another small grinder....it was a bit bigger than the Ninja, larger capacity and more powerful motor, although it was cheaper - not a well known make.  Having read up on it and looked at reviews (which were all good, other than saying it was a bit noisy), I decided to go for that one...it arrived 2 days later.  Here it is:- 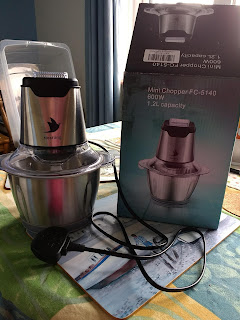 I've used it several times since it arrived, for grinding oats into flour, and chopping vegetables....it does it with ease - yes it's a bit noisy, but it doesn't frighten Betty or the neighbours and it's not like I use it for hours!  I love the stainless steel bowl, it's so easy to wash up and takes up a lot less space than my old food processor.  It's really easy to use as well, just one big button on the top.  I'm really pleased with it.
It's my birthday on 6 November, normally I just tell husband what I want and he buys it for me....or sometimes I buy it myself and he gives me the money.  It's easier all round, as he always says he has no idea what to buy me (we will have been together 40 years next March, you'd think he'd have cracked it by now 😂).  However, this time he said he'd already got me something, and assured me I'd love it and it was one of the best things he's ever got me....I was slightly worried!  He brought it home a couple of days ago, originally he said he wanted to give it to me the day before he goes in hospital for his operation (31st) - just in case he said!  But when he got in from collecting it, he was practically hopping around with excitement and couldn't wait for me to see it, so I opened it....well, he really has excelled himself, want to see? 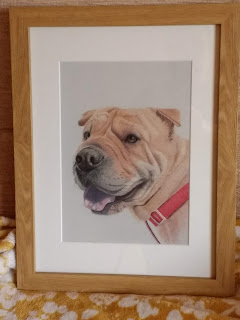 A portrait of my beloved Betty!  One of our neighbours is an artist (I had no idea, she's a retired optician!), she specialises in animal portraits, and husband commissioned her to do this picture of Betty for me.  It's so lifelike, and so incredibly detailed (it's not paint, but pencils) - she's got Betty's fur, and wrinkles, tongue and muzzle details and even the spots on her nose so exactly right.  Apparently it took her about 25 hours to do!  I'm stunned, it is truly fabulous, I can't thank husband and J (the artist) enough.  I was going to put it in the lounge, but our lounge is south facing and gets lots of sunshine so thought it best not to put it there, I don't want it fading in the sun.  So husband has put it up in the hallway, where I pass it a 100 times a day.  I just love it.
Posted by Sooze at 14:37