We took Betty to the beach this morning, having checked first that it wasn't high tide - low tide, the sea was so far out we could barely see it.  She has the same routine on the beach - she initially charges round like a mad thing as soon as we let her off the lead. Then she investigates all the seaweed for smells, often weeing on it to deposit her own smell. If there's a big clump she picks it up in her mouth and violently shakes it, as if she's killing it.  If we throw pebbles for her, she'll chase after them but won't bring them back - she's not a retriever.

Her most favourite thing of all though is to dig a hole in the sand, throw herself down into it and wriggle around on her back, with an expression of sheer joy on her face.

After half an hour of fun, we put her back on the lead to go back to the car......she couldn't resist one last roll around though! 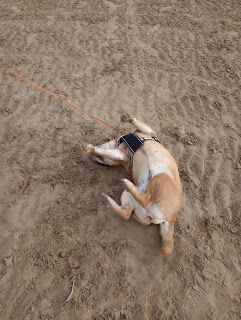 It was really warm here at the park yesterday, and is already again today.