Husband has had his offending toes done - both of his big toes. 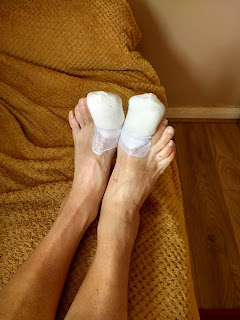 He had both nails removed entirely, the doctor said they were too far gone to be able to just take a small section of each side off.  He's been told to keep his feet elevated for the rest of the day, to slow down bleeding - as a heart failure patient who takes lots of medication, he is a bleeder! (in more ways than one 😂😉).  The doctor said that they no longer offer redressing appointments routinely, patients are expected to do it themselves (or get a friend or relative to do it for them) unless there's a clinical reason why they can't do their own.  Apparently, according to the doctor, husband is a special case because of his diabetes and previous foot problems (he has very little feeling in one of his feet, the one that was operated on the year before last), so he is entitled to be seen by the podiatry clinic for the next 6 months.  She asked him if he wanted to do it himself......and the daft man said YES!!! 😞😝 - honestly, I could throttle him sometimes.  He's said since coming home he'll probably have a problem trying to do it himself - well if he thinks I'm doing it when I have back and hip problems (and the thought of seeing his bleeding weeping toes looking like raw meat turns my stomach) he's got another think coming.  So he's going to ring the clinic and request a redressing appointment.  I should bloody well think so too.