A headline I read online said that visitors are flocking to UK beauty spots.  Well, this was the beach yesterday:- 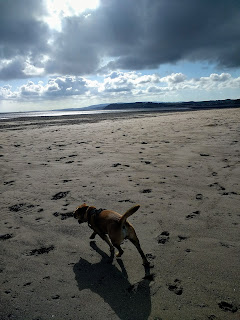 Looking towards the right 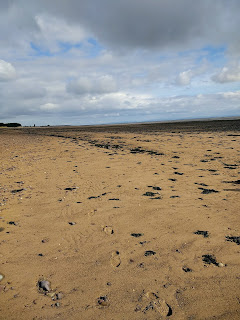 And then the left

When we arrived at 08.45, there were about 6 other cars in the car park.  Parking was free, the machines were covered over with black plastic.  We'll buy an annual season ticket when the little holiday park, which owns the beach, reopens.  For the whole time we were there, we only saw 2 other people, both with dogs, and they were so far in the distance we could barely see them.

Although there was weak sunshine in between the clouds, a bitterly cold and strong wind was blowing, so it was freezing - not that it bothered Betty, she had her usual whale of a time, charging around like she hadn't been off the lead in weeks (she's off the lead in a field every day), digging in the sand and playing with the seaweed:- 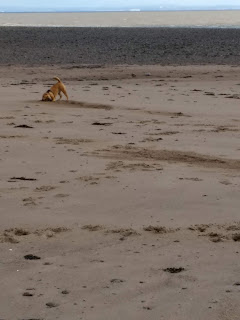 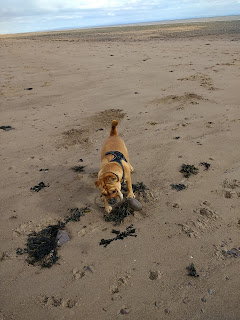 She grabs mouthfuls of the seaweed and shakes it violently, as if she's killing a rat.  Then spits it out and charges on to the next offending lump of it.  She had a wonderful time.

It was so lovely to be back there, I couldn't sit anywhere, had to keep moving as it was just too cold to sit.  We stayed about three quarters of an hour....it was still no busier by the time we left.

Then on to Minehead for shopping, which was ok - no queue to get in, not many people in the shop, everyone keeping their distance, minimal queue for the checkouts, no drama.  Husband went off to the garden centre to collect his veg order, he said it was very well organised, barrier across the entrance allowing in one car at a time (there was only 1 other car besides his anyway) to collect your prepaid order from outside, placed in numbered bays, one staff member checking your name off a list and directing you to your bay.

The chip shop is apparently open, but we didn't get any - it was too early for lunch and too cold to go back to the beach to eat, we'd have had to stay in the car.  Besides, the cold wind was making us both need the loo - the beach toilets are closed - so we went straight home after shopping.  It was so lovely to be able to go there after so many weeks away, I missed it terribly.
Posted by Sooze at 06:00