Early this morning we went to the Marshes (our local nature reserve) for the first time in months, it's been open for local residents who live within walking distance (we don't), but the car parks, hides and toilets were all closed.  They've reopened the car parks but not the hides or toilets.  We got there just before 08.30, even then there were quite a few cars in the various car parks.  However, we saw hardly any people (it does cover a very big area, including the beach) - there were 2 couples walking in the far distance, and 2 cyclists and a jogger passed by us and that was it as far as people were concerned.  The car park we used was empty.

Had a really lovely hour's walk, Betty had a fantastic time too, she likes  to throw herself down in the long grass verges and roll around on her back, and the front half of her body is always disappearing into the undergrowth when she hears a noise or smells something interesting.  A few photos:- 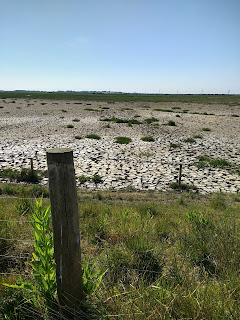 Shows how hot and dry it's been, the last time we went (early March) this area was under a couple of inches of water - the tide comes in from the Bristol channel twice a day 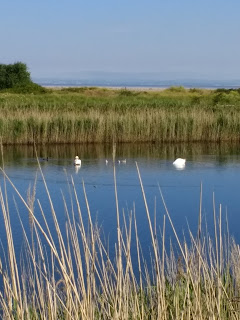 Pair of swans and 4 babies.  There were several coot families too, they all kept diving under the water so difficult to photograph them.  Several swallows swooping down and taking insects off the water too - no chance of me getting photos of those 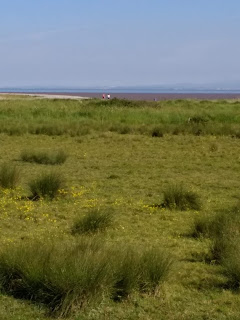 Crowds (!!) in the distance heading for the beach 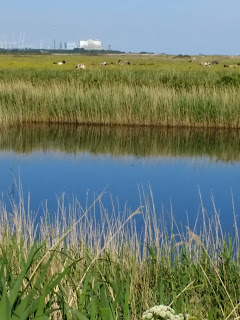 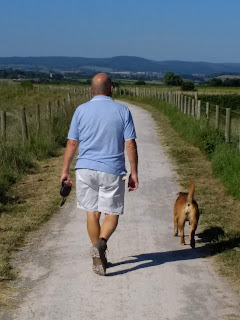 And finally, a couple of bums

We saw reed buntings and skylarks - well, more heard than seen in the case of the skylarks, they have such a beautiful song.  There's one thing I would have loved to take a photo of - a red kite soaring way up overhead, it's the first time we've seen one round here.  I had heard they'd been seen in the area over the past couple of months but hadn't seen any ourselves up till now.  My phone cam is nowhere near good enough to take a photo of a kite way up in the sky though, even with zoom it would still have been just a speck.  Lovely morning.

Another nice thing....my chiropodist rang me a few days ago, she's allowed to start working again from Monday (she works from a hairdressers salon, but the hairdressers aren't allowed back yet).  She has to wear full PPE - she always wore gloves and a mask anyway, but will also be wearing a full apron and a face screen from now on.  Customers have to wear mask and gloves too, she will supply them if they don't have any, and she's operating a strict one in, one out policy - you have to wait outside the salon until the previous customer has left.  I had an appointment booked in late March, obviously she had to cancel it and I can now go on Monday afternoon - brilliant, pedicure and foot massage to look forward to.  She apologised for the fact that she's had to put her prices up by £5, due to the cost of PPE rising so much - someone (not her) is clearly profiteering - she said as an example the gloves she uses were £12.99 + VAT per box prior to Covid, now they're £50 + VAT!!