So.....the caravan.  We bought the van on 2 June, so it's taken us just over 2 months to do it up, and it's now unrecognisable as the dilapidated, dated, filthy, cobwebby almost-a-wreck it was when we first took it on.  The site owner didn't actually want to sell it to us - he wanted to get rid of it and move a newer, and obviously much more expensive, van onto the pitch.  There was no way we could afford that, but we particularly wanted the pitch this van was on.....partly because of the fenced in garden (and the fence is in very good condition and will last for years), and partly the position of the pitch, being quite high up on the terraced site and with lovely views.  So I talked him (and husband, to a certain extent, as he wasn't overly keen) into it, having had a good look at it and checked it over thoroughly with a professional damp meter, loaned to us by my caravan engineer friend, who gave me lots of useful advice also.  The van structure was basically sound and I liked the layout, I particularly liked the large lounge.  I could see the potential in the van, and knew almost instantly how I wanted it to look, the colour scheme, changes I wanted to make, etc - I had vision, if you like.  The site owner said he had fond memories of the van actually, as the previous (deceased) owners were great friends of his, so he agreed, with some reservations, that we could have it.  He actually didn't charge us for the van, he said in its present state it had no monetary value, he just charged us for the pitch - an entry into the park family as he called it - and the first year's pitch fees.

The first thing we did was to rip out the fixed seating in the dining area - the curved bench seats were really uncomfortable, the fabric was heavily stained and the whole thing took up too much room.  I wanted the lounge/diner done first, as we would need somewhere comfortable to sit and relax for coffee breaks when we were doing the rest of the work.  The lounge sofa, although being in the same fabric as the dining seats so very dated and stained, was actually quite comfortable.  So we took all the cushioned seating home and I steam cleaned it all, before recovering in modern loose covers.  So here's the lounge and dining area in the original state:- 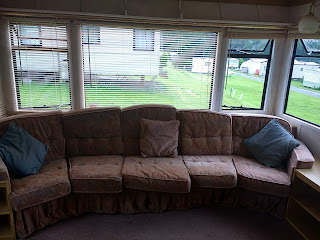 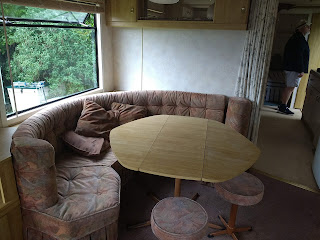 and here they are now:- 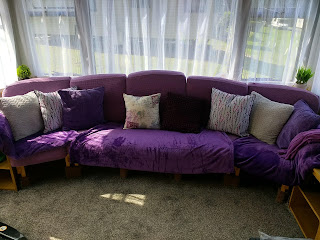 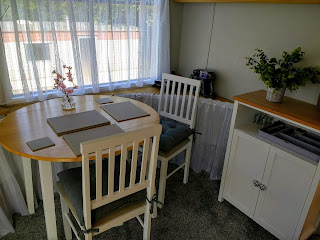 There are curtains at all the windows in a shade matching the sofa throws - we got rid of all the old broken Venetian blinds.  I haven't got a photo of the curtains!  I steam cleaned the lounge carpet, but it still didn't come up very clean, so we got a new carpet.

The kitchen was a major job, it had the most awful iridescent tiny tiles on the walls, lots of which were broken and made the whole kitchen very dark.  There was no work surface to speak of, mainly due to an area of worktop being taken out to accommodate a large old fridge freezer.  There was an old gas cooker - we had no idea if it actually worked, it was old and dirty and I didn't want it.  The kitchen cupboards were ancient and falling to bits, the old ceramic sink was chipped and the taps leaked, the flooring was awful.  So the whole lot had to come out.  Husband and his mate ripped it all out, including the awful tiles, and fitted new white base units and a new stainless steel sink.  The wall cupboards turned out to be in reasonable condition once cleaned up, so we kept those, I sanded and painted the doors white and changed the handles.  We had a new fridge and small electric cooker - I didn't see the point of getting a full size cooker as I don't intend to be cooking 3 course meals or baking cakes whilst we're there!  And having a table top/half size cooker meant I could have extra cupboard space underneath for saucepans etc.

The kitchen as it was when we first viewed the caravan:- 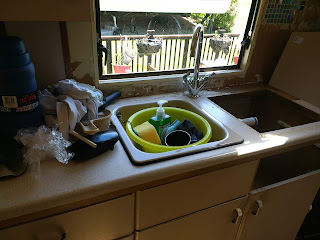 and the awful tiles that gave me nightmares:- 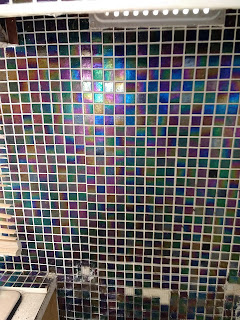 The kitchen as it is today, bright and beautiful and very workable:- 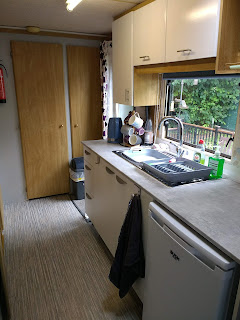 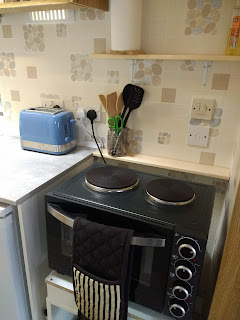 I'll continue with pictures of the bedrooms and bathroom tomorrow, and our plans for the garden.

Husband, 69, retired and living well with heart failure, me, 60, diabetic and occasional black dog/anxiety sufferer, homemaker. I cook and bake, crochet, make cards, play with a new hobby of watercolour painting, read and enjoy days out and looking after husband who doesn't know how to pace himself. We have a gorgeous 3 y.o. dog Betty who is 50% SharPei, 50% English Bulldog, and 100% lovable. Londoners who were brought up in towns but are now delighted to be country dwellers and carrot crunchers! We enjoy a frugal but full and satisfying life.