A step or 2 forward, at last

Finally had a phone consultation with my GP today.  He's had the hospital report and MRI results back and is in agreement with the consultant's findings.....that the numbness in my big toe, pains in both my legs and my lower back are all caused by the prolapsed disc.  He also agreed that the extra vertebrae in my lumbar spine is responsible for the unusual L3/L4 damage, rather than L5, which would be the normal position for these symptoms.  He apparently specialises in sports and orthopaedic injuries, so does know what he's talking about.  What a good job it was him I saw! (he's a locum I think, not one of our surgery's permanent doctors).  It was lucky that he recognised that the problem wasn't just about my numb big toe, but was a symptom, in conjunction with my various other leg and back pains, of disc and nerve damage in my lumbar spine.

He's prescribed amitriptyline (I've had it before, it does help me sleep, as well as helping to alleviate the nerve pain) and said he will refer me to the orthopaedic department, and try and get me seen quickly (I won't hold my breath!).  He asked that I ring him in a fortnight to let him know how I'm getting on with the medication, he said there's plenty of scope for it to be increased, or another medication added, if it's not doing much.

He's in agreement with me going to see an osteopath (my appointment is in just under 2 weeks), but said the NHS physiotherapy would do just as well.......to which I replied well it might if I actually got to see them and they hadn't discharged me without even telling me!  He was dumbfounded at that, but suggested I try again (it's now self referral apparently) - I declined and said I'll see how I get on with the osteo.

I now feel like there's a glimmer of light at the end of what has been a very long tunnel.

My lovely Betty is 5 today, seems impossible that we've had her for nearly 5 years, she was such a cute wrinkly squeaky little thing when we first got her at 8 weeks old. 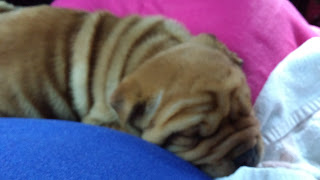 She's grown into (most) of her wrinkles now! 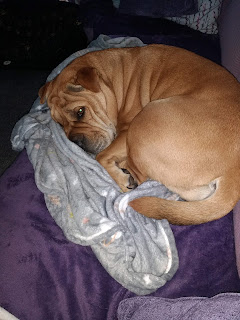