Betty was absolutely bursting with energy this morning (more than can be said for me!) so we took her back to Uphill beach for a run around.  Unfortunately, it was high tide (duh, should have checked!) so there wasn't a lot of dry beach available.  Being a damp cloudy day, it was also very blustery, there were several wind surfers in the sea, and the hovercraft rescue people going up and down the beach, keeping a good eye on the surfers:- 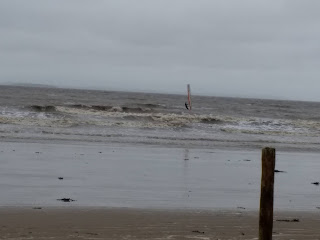 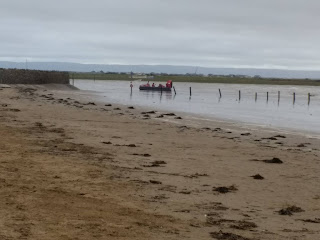 Sorry, I know the photos aren't up to much, taken on my phone as usual.

Betty doesn't like the sea much, so doesn't really go in it (just as well, being a short faced brachycephalic dog).  Considering just how blustery and cloudy it is today, with spots of drizzle, and the high tide, there was a surprising amount of people - and lots of dogs - on the beach - although there aren't any in my photos!  So we could only let Betty off the lead for a short period of time - she's somewhat unpredictable around other dogs.  She did have a little run around though.  Another dog, a retriever type which wasn't on lead, was intensely interested in Betty and kept running over to her - fortunately, she was back on the lead by then.  Now, Betty wears a bright red harness and lead with CAUTION printed on it in large letters, but people either take no notice or always say things like "it's ok, he/she only wants to play" whilst letting their own dogs run around Betty off lead.  Well, that's all very well, but they don't take account of the fact that OUR dog most likely doesn't want to play!  Several times I've had to ask people to come and collect their dogs - I do always explain that Betty is anxious around strange dogs and isn't always keen to play, and they're generally ok then.

We didn't stay too long in view of the amount of other dogs (there must have been 12 or 15, with more arriving all the time).  Betty wasn't keen on the blustery wind either, her tail was between her legs whereas, being a Shar Pei, it's normally straight up in the air.

The plumber and his mate are here at the moment, sorting out the boiler - fortunately, it's fixable, just needing a new part (luckily they had it in the van).  Will still cost over £150, but that's better than hundreds for a new boiler.  They've fixed it now, we have hot water again, thank goodness.

And the other good thing.....my elder brother and SiL have become grandparents, their son and wife had their first child, a little boy called Robin, on Monday, mother and child are well, he was 2 weeks early.  It's the first baby in our family for a number of years, so lovely to have a birth instead of a death.

Husband, 69, retired and living well with heart failure, me, 60, diabetic and occasional black dog/anxiety sufferer, homemaker. I cook and bake, crochet, make cards, play with a new hobby of watercolour painting, read and enjoy days out and looking after husband who doesn't know how to pace himself. We have a gorgeous 3 y.o. dog Betty who is 50% SharPei, 50% English Bulldog, and 100% lovable. Londoners who were brought up in towns but are now delighted to be country dwellers and carrot crunchers! We enjoy a frugal but full and satisfying life.