I must apologise for not commenting much on your blogs recently - been a bit busy! 😂  I have tried to read them when I get a spare few minutes, hopefully I'll catch up properly soon.  I also need to mention that when we're staying at the caravan (our first sleepover is almost here!! 😁) it may not be possible for me to write a blog post - we have no WiFi there, haven't got round to doing anything about that yet as it's not really been high on my list of priorities(!!).  Some caravan parks have WiFi, ours doesn't, we have to make our own arrangements for that.  I do have WiFi on my phone, but it's dependent on signal of course - and signal there at the park is very hit and miss, I can be getting 4G sometimes, but in the next minute the signal has completely disappeared.  It's better outside in the van garden, but even then it's still unpredictable - and I'm not going to be sitting out there in the rain trying to get a signal 😂😒

This morning we collected the bed frame on the way to the caravan.  Putting it together was less of a hassle than is usual for flat packs (it's a metal frame) - in fact we managed without swearing at each other, threatening divorce or getting my fingers squashed....quite an achievement.

We then moved on to cleaning the bathroom, which made me heave at times, it was so filthy and smelly.  Not anymore though, it's lovely and clean and fresh smelling now.  Here's the little bath and shower before cleaning:- 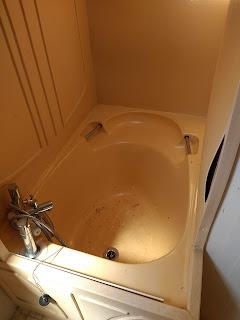 The bath was really dirty - initially we thought it was cracked, but it was just streaks of dirt, it was also very cobwebby and the skylight above the bath was in a poor state, although it doesn't appear to actually leak.  As you can see, the waterproof boarding is bowed and coming away from the wall on the right side, although it'll be easy enough for husband to fix back into place. 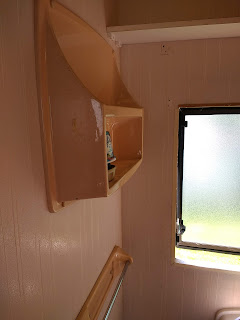 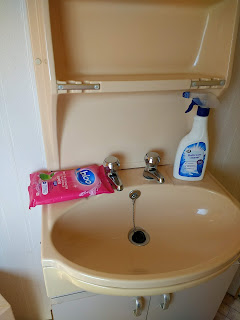 The bottom photo is after I'd cleaned the basin, it took several applications of the bathroom spray, lots of hot water and half a packet of antiseptic wipes, but it's clean now.  The toilet was yucky, we're having a new toilet seat.

The bathroom is very dated, but it's serviceable.  Ideally, we'd like the bath taken out and a shower cubicle put in, along with new basin and toilet - however, that'll cost too much so we're not doing it, we'll just live with what's there.  The plastic mirror and shelf unit above the sink is going, we'll have a new mirror and shelf after the wall's been papered with the same waterproof vinyl we put in the kitchen.  That's a job for the weekend when we're staying in the van for the first time! (did I mention we're starting to spend nights there from this Saturday? 😁😁).  I'll put more photos up once we've finished decorating the bathroom and laying the new flooring.

There are several plastic lidded boxes stacked up in the dining area, full of kitchen and bathroom equipment, linens etc, awaiting putting away - I'll do that tomorrow morning when husband goes off to collect the mattress.  Then we'll go shopping in the afternoon, and then move in on Saturday!