Yesterday didn't go as well.....no disasters, just frustrating really, but it'll all get sorted during the coming week.

Part of the trouble is husband's constant overthinking and making things more complicated than they need to be, and his total disorganisation - honestly, after 40 years you'd think I'd be used to it.  I know he can't help it, it's a lot to do with his dyslexia and dyspraxic tendencies - his mind works totally differently to mine, and he's so blimmin clumsy he could trip over a leaf, and gathers cuts and bruises galore from bashing his fingers or head or knocking into things.  As I was a secretary for most of my working life, I'm supremely organised, total opposite of him.

When I want to do some baking, for example, I gather everything I need together first of all - as would most of us, no doubt.  It would be sensible for husband to do the same prior to doing a DIY job - only he doesn't, he constantly walks backwards and forwards to wherever he keeps his tools, picking up one thing at a time as he needs it.  When he's finished using a particular tool, he puts it down (beside him usually) and instantly forgets where he's put it - I've always said his hands are completely disconnected from his brain.  So then he spends (wastes) more time wandering around looking for it, or asking "Have you seen my Phillips screwdriver / hammer / hacksaw?" - normally right beside his knee, foot or hand 😒

If only he were more organised and less forgetful, and didn't waste so much time collecting or looking for tools, jobs would take literally half the time.  And he spent an hour wittering on and trying to work out how to take off an odd bit of wood that he insisted shouldn't be there and needed to come off (the screws were rusted in place) whereas I said he should just leave it as it would be hidden behind the sofa and nobody would see it.  He got it off in the end, there's an hour we'll never get back!

Anyway, he's now boarded out the wall behind the new sofa and laid the extra piece of carpet, and we put the sofa and recliner chair in place.  Although they do fit (we'd made sure to measure up beforehand), it is a bit of a tight fit and feels a bit cramped.  So having stood looking at it all and thinking about it, we've decided to take out part of a cupboard and shelf area beside the chair, this will give an extra 8" or so of space which will make all the difference, and we'll be much happier.  So that's a job for next week. 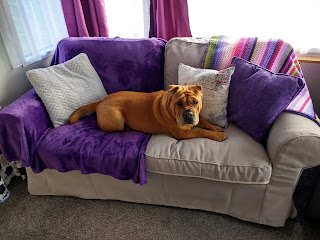 This is my blog, I will say what I like on here.  If you don't like things I say, you don't have to read.  I make no apology for not publishing comments that have a go at me, from people who don't know me and don't live with me!  You only know what I choose to publish on here, which isn't everything.